Phang Nga is a province just north of Phuket which is getting increased attention from developers with every year.

Mai Khao Beach is Phuket's longest beach that spans for about 11km.

Nai Yang is noted for its impressive forest of tall casuarina trees, and as a picnic spot for Thais.

The east coast of the island includes all areas north of Phuket City on the coastline.

Nai Thon is a beautiful stretch of sand that for reasons unknown has been overlooked by large resort developers.

Layan Beach is a beautiful and secluded beach with only a couple of resorts.

Talang, close to the main highway which crosses Phuket from north to south is ideal for those looking for a place which is centralized and easily accessible. Bang Tao is a large open bay with one of Phuket’s longest beaches. A popular area, Bang Tao includes the Laguna Phuket and the many facilities it has to offer. Shops, restaurants and bars are plentiful in the Bang Tao area as are the property options. This is definitely an area worth checking out regardless of whether you’re looking for a luxury villa, house or apartment.

Cape Yamu boasts one of the best views on the island.

Cherng Talay is a town area towards the west coast, rapidly becoming a very popular area for expatriates

Surin Beach still has a small village atmosphere, but this is gradually changing as more and more major housing developments and hotel projects get underway. Just north of the lights and noise of Patong lies Kamala beach. A quieter stretch of sand with a more relaxed feel. A paradise for those who prefer relaxation.

Koh Maprao is a small island in a quiet lagoon to the east of phuket with some luxury villas.

Kathu is located in the middle of the island, between Patong to the west and Phuket City to the east.

Patong is the most famous beach resort in Phuket, with its wide variety of activities and nightlife.

The island’s capital is a small cozy town. Rows of two-storey sino-portugese houses, modern apartments and shops — all this creates an exciting mix of old and new, simple and sophisticated, peaceful and pulsating. A heavily populated area of Phuket, Chalong extends from the southern end of Phuket City down towards Rawai. Being close to Phuket Town makes Chalong a favourite for locals as well as expats, with an abundance of housing options available.

One of the larger beaches in Phuket, Karon has plenty to offer the holiday visitor as well as long-term residents.

Panwa is a quiet cape at the south east of the Island.

Very popular with families, Kata is an all round favourite due to its spectacular beach, great restaurants and lively but not raucous nightlife. Rawai is home to quite a few of Phuket’s foreign expat population, lending a bohemian and laid-back flavour to the way of life there. Residential housing options are numerous in Rawai and there are plenty of great restaurants and nightlife to keep residents entertained. 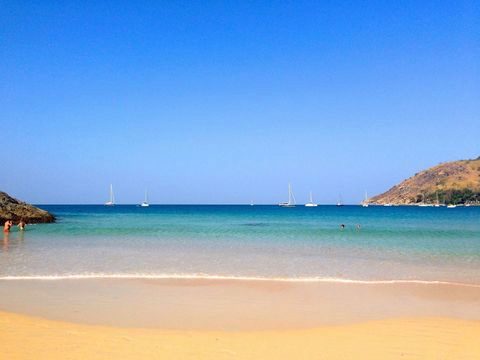 Peaceful place in the south. Nai Harn is not Phuket’s longest beach, but it borders the most gorgeous lagoon on the island. The middle of the beach is dominated by the Nai Harn monastery, which has prevented excessive development and is the reason that the beach is generally less crowded than other spots on the southern part of the island.